Christmas is an expensive time of year but it also gives you an opportunity to reduce your cloud costs. Here’s a post (originally from Christmas 2015, updated for 2016) about how to cut your AWS spending over the holiday period. 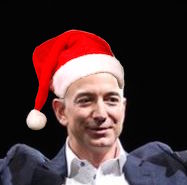 Christmas comes but once a year

Bringing lots of joy and cheer

You and me and he and she

And we are glad because

There is a Santa Claus

Christmas comes but once a year

Bringing lots of joy and cheer

Unlike Christmas, the AWS bill comes every month and does not generally bring joy and cheer. In this post I want to share details on two tools that I have used with clients to reduce their AWS costs all year round, and a simple action you can take to reduce your bill even more over the holiday period.

Like so many other companies, this client has been through the AWS boom times - ease of use leading to rapid expansion of cloud resources and the resultant billing - and the bust - when those bills start becoming so significant they attract attention from the finance department. To help reduce costs they developed a couple of tools and both have been open sourced on GitHub.

The tools were both written by the very smart David Baggerman and are called ‘Cloudcycler’ and ‘Flywheel’.

Cloudcycler allows you to shut down and start up AWS resources on a scheduled basis. There are quite a lot of tools around that do this but none meet the exact client needs. In particular Cloudcycler allows them to:

Cloudcycler is used to turn off the majority of the non-production environments outside of office hours. The default configuration is to only run these environments from 08:00 to 17:00 weekdays - with some exceptions for environments that are used by offshore development teams. This produces significant savings - in a 30 day month there are 720 hours in total. Of those 30 days, around 22 are working days so we now run these environments for 22 (days) * 9 (hours) = 198 hours - a saving of 522 hours - or a cost of just 28% of the full monthly running cost.

Flywheel takes this a step further. Turning on non-production resources on a scheduled basis is better than having them running full time, but even better would be to not have them running at all until they are needed. Flywheel does this by being an EC2 ‘proxy’. Instances controlled by Flywheel are by default shut down. Flywheel provides a simple web site with one-click startup for those instances, so the end user, such as a developer or tester, can easily start up the instance on demand. After a (configurable) time period the instance is automatically shut down again. A particular use case is for test instances which are only required to be on for an hour or so during the day.

Using both of these tools has significantly reduced AWS running hours and therefore costs. This graph, taken from CloudCheckr (used for cost & security monitoring) shows the impact that Cloudcycler has on running instance hours over time.

It is an overall upward trend as more projects are migrated to AWS but you can clearly see the effect of turning off resources (particularly clear are the dips at weekends).

Many companies encourage staff to take extra leave around Christmas and also implement a change freeze, and we can use this to our advantage in saving AWS costs.

Speak to your development teams and let them know that there will be a new Cloudcycler schedule in place over the CHristmas leave period. During that time, environments will be turned off completely, all day. Make it an opt-out system - by default all systems are in scope and exceptions can be added on demand, for the small number of projects which will be active over this time.

This has the potential to save 15 (days) * 9 (hours) = 135 hours of running costs over the Christmas period - a good saving gained just by sending a few emails and changing a configuration file.

P.S. excluding Christmas there are seven weekday public holidays in New South Wales, Australia in 2017 - I would welcome a pull request to the Cloudcycler repo with changes to make it read those dates (from a static file and/or a web service) and extend the scheduler so those days are treated as weekend days.